Telluride’s Via Ferrata has evolved from underground status to a hugely popular and well-used route.

Learn About the Via Ferrata Sustainability Fund

Even if some of its sections seem more like an exposed hiking trail than a rock climb, make no mistake, our via ferrata route requires technical climbing abilities and gear. An accident on the via ferrata could easily have fatal consequences, and even a sprained ankle can quickly become a serious event and potentially a major rescue. Please read through the list of recommended gear, safety tips and general information at the bottom of this page before you head out. We highly recommend hiring a local guide to take you for a more enjoyable, safe, and less stressful experience.

If you have anything to report about the route, such as loose holds, maintenance concerns, changes in the route or other info, please contact us.

If you are a fan of Telluride’s Via Ferrata (the Krogerata) and are interested in helping to keep the route free and open to the public for future generations, we encourage you to learn about and donate to the Via Ferrata Sustainability Fund. 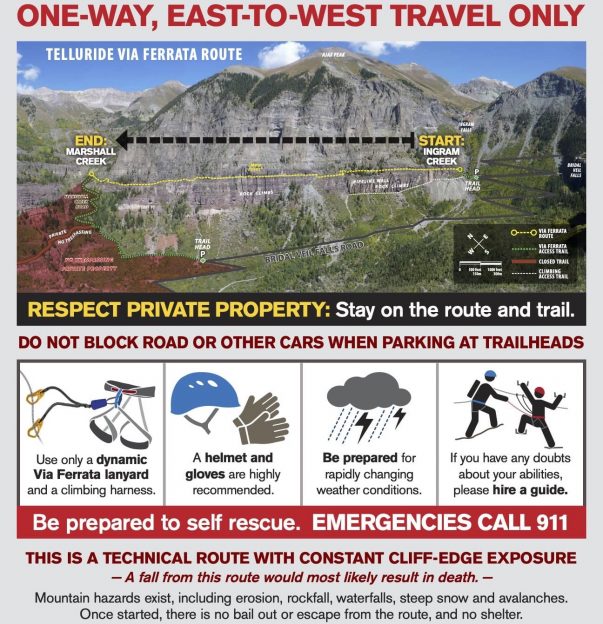 Telluride’s Via Ferrata is located at the east end of the box canyon on the south-facing wall below Ajax Peak. To access it, drive up the Bridal Veil Falls Road or park at the bottom and walk up. There are two access points, lower and upper. It is about a ½-mile from the bottom parking area near the mine settling ponds to the lower trail head, and 1.75 miles to the upper trail head. Please refer to the ‘Map’ tab for more information about access points, private property to avoid, and suggested parking locations.

Telluride’s Via Ferrata is located at the east end of the box canyon on the south-facing wall below Ajax Peak. To access it, drive up the Bridal Veil Falls Road or park at the bottom and walk up. There are two access points, lower and upper. It is about a ½-mile from the bottom parking area near the mine settling ponds to the lower trail head, and 1.75 miles to the upper trail head. Please refer to the ‘Map’ tab for more information about access points, private property to avoid, and suggested parking locations.

Telluride’s Via Ferrata can be accessed from either its east end or west end trail heads for a loop, or out-and-back adventure. We suggest doing the route east to west as that is how majority of traffic moves and will create the most pleasant experience for you and your group. Please respect private property on the west end of the Via Ferrata and don’t trespass on the lower Marshall Creek Road. During high-traffice times (i.e. summer weekends), please utilize an east to west loop.

If you encounter another group along the route, which is more likely than not, let the group with the fewest number of people go through first. Be sure to peer around edges or holler before you start the “Main Event”. If another group is going the opposite direction to yours, you may need to wait or back-climb in order for them to pass.

Do you love the Via Ferrata as much as we do? Telluride’s Via Ferrata Sustainability Fund was set up to help protect this unique route well into the future and preserve its free access for the public. You can learn more about the fund here and donate yourself by visiting our support page here. We hope you will consider donating to this special experience today!

The via ferrata in Telluride, also known as the “Krogerata,” was the brain child of renowned climber and local builder, Chuck Kroger. Many sections of the route are un-cabled to add technical mountaineering elements (something Chuck cherished). These elements include necessity of harnesses, carabiners, shock-absorbing leashes and knowledge of how to utilize hand and footholds (both manmade and natural). These technical elements show up fairly early in Telluride’s via ferrata and require you to make decisions as to whether or not you are prepared for the endeavor. The via ferrata isn’t for everyone, but it is for everyone who is prepared. Watch the video below to see a quick preview of the route.

Make sure you have the correct gear when heading out on Telluride’s Via Ferrata, having the wrong gear can put you in an unsafe situation.

There has been a dangerous trend in the use of aid climbing daisy chains and static webbing as safety tethers to attach to the cables. Recent tests by Black Diamond and other groups have shown that this type of tether system can fail under much smaller forces than thought. A dynamic Via Ferrata lanyard is the safest method of connecting yourself to the route’s fixed gear and is considered the worldwide standard for safe Via Ferrata travel. Check out Daisy Chain Dangers for more information.

Local gear shop Jagged Edge Mountain Gear sells all the right equipment for safe travel along the Via Ferrata. They can be reached at 970.728.9307 so you can make sure everything you need is in stock.

We recommend the following gear when climbing Telluride’s Via Ferrata:

If you don’t have the proper gear or climbing experience, we highly recommend hiring a local guide service. Guides provide all the proper equipment for safe travel and are very familiar with the route and local weather. 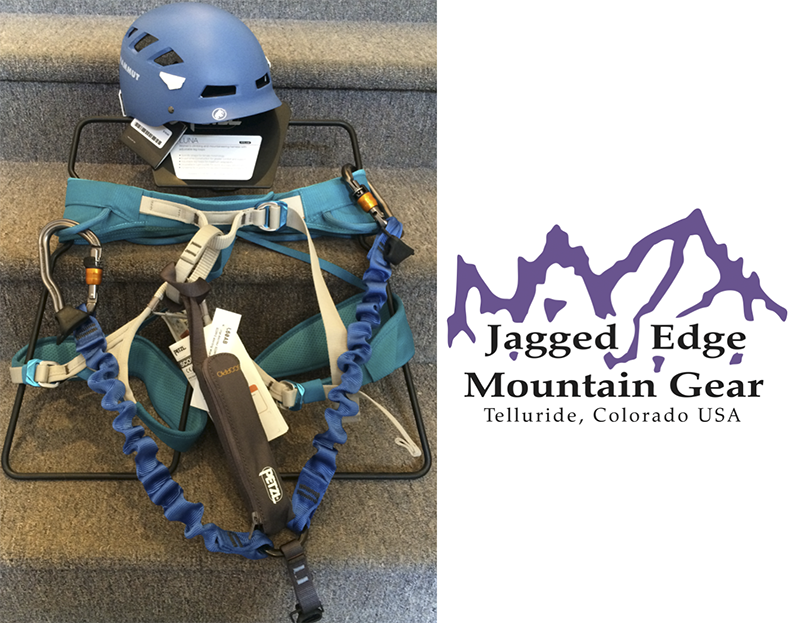 Jagged Edge Mountain Gear supplies all the equipment you need to climb Telluride Via Ferrata.

Beware of Knocking Rocks Off the Trail

There are several areas on this route that traverse above popular rock climbing routes far below. If you accidentally kick loose a rock, make sure to yell “Rock!”.

Use a Dynamic Safety Device

Use a safety device specifically designed for Via Ferrata travel. These are available locally at Jagged Edge Mountain Gear.

Wear a Helmet on the Via Ferrata

You are below a huge alpine mountainside. Even a marble-sized rock could ruin your whole day, or worse.

This climbing route is not appropriate for small children, very short adults, or people who don’t enjoy heights and exposure. And don’t even think about bringing your dog.

Always Clip Into the Cable

Always clip into the cable when it is available. Make sure to always have two points of connection with the cable and yourself (when it is an option).

There are no options for escape off of this route and getting caught in a lightning storm up there will be stressful at best and potentially dangerous. Rain, snow and hail increase natural rockfall from above and often create waterfalls across the trail that must be crossed under.

Bring a headlamp if you think there is any chance of being up there in the dark. A small stumble in the dark would likely have fatal consequences.

Tell a trustworthy person where you are going and when you plan to return.

Telluride’s Via Ferrata can be done as a loop, or an out-and-back adventure. Please avoid trespassing on private property near the route’s western edge. If you have anything to report about the route, such as loose holds, maintenance concerns, changes in the route or other info, please contact us.

History of the Via Ferrata

Telluride’s unique Via Ferrata wouldn’t be here today without renowned climber and builder Chuck Kroger. Chuck was an early Yosemite climber and helped establish some of El Capitan’s early test pieces such as the Dawn Wall. He moved to Telluride in the 1970s and rooted himself in the community. As an inventor, he had cooked up many crazy schemes. He built a railroad bike that allowed him to pedal on old railroad, built an ice bike and did a winter descent of the lower Dolores River canyon.

Over time, he sought more adventure in his backyard. Being a climber and mountain runner, designer and builder, inventor and fabricator, he was drawn to the new and unexplored. One day he took a hike out onto the Via Ferrata ledge system and wandered all the way out to what is now known as the “Main Event”.  He roped up and had a look around the corner. From there, he decided that with a few man-made climbing holds, he could surmount the Main Event’s difficulties and thereby create a new trail (part rock climb, part mountain hike, part run). Thus, the idea was born! Being a highly motivated individual, he set out right away, immediately tackling the Main Event.

After it was installed, as with many rock climbs, assessments were made of the overall worthiness of the endeavor. The trail was excellent, the setting sublime, the climbing interesting and the prospect for additional rock climbs in the area was excellent. Further efforts eventually continued to improve the quality of the route.

It was about this time when Chuck Kroger was diagnosed with Stage 4 Bone Cancer. He was quite quickly taken over by the disease and the route’s progress halted. After his death, a few of his compadres picked back up on the route, partly as a way to honor their friend, and also due to the incredible quality of the experience. Cables were added, additional sections of handholds were installed, various structural engineers were consulted (all rock climbers and friends of Chucks that donated their time), to ensure the safety of the installations. Out of all this grew a sense that a truly unique climbing experience had been created. The route’s popularity grew enormously.

In the end, an incredible mountain experience was created, and popularity followed soon after. The route took hold of people’s interest outside of the climbing community and began to attract people with less climbing experience. Photos of the Via Ferrata began to circulate and eventually made their way to the mainstream media, and the route eventually came under public scrutiny.

This is where the Telluride Mountain Club stepped in. We didn’t create it, but we understood that the people who did were working as climbers always have; installing routes for the benefit of the climbing community. No one truly understood at the time that they were creating a recreational gem that would be cherished by the local population at large. You can help TMtC support the Via Ferrata via the Via Ferrata Sustainability Fund here.

Are you a fan of Telluride's Via Ferrata?