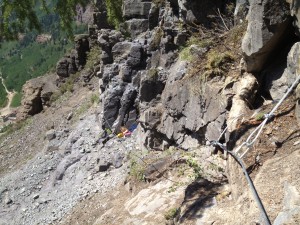 The extension begins at the right side of the photos near the snapped off tree and extends 50 ft apx to the west. The old cable east of the snapped tree has been replaced.

Via Ferrata Cable #4 which was damaged, has been replaced. It’s also been extended about 50 feet to the west.

The cable was extended to compensate for the trail, which became a little more difficult as a result of rockfall. Take note of the telephone pole sized trees broken off when you go through there.

Note: Cable 4 is just west of the hanging forest.

August 13, 2013 — Reports of a rockfall off of Ajax Mountain, Saturday night (8/10), have caused substantial damage to Telluride’s via ferrata.

Climbers should use caution on Telluride’s Via Ferrata until repairs are made.

Climbers should use extreme caution on the via ferrata until repairs are made. Please check back here for updates on the repair and conditions.

UPDATE: August 14 —  Where the cable is damaged, climbers should clip into the rungs instead. A few bolts were impacted by falling rocks but none are noticeably loose. After the cable, where the tree was taken out, the trail is a bit rough. There is now about 30 ft of climbing rope and a warning sign.

The damage warrants caution but managing safety on this section is still reasonable.

Rockfall into the gully just west of the Hanging Forest has damaged a cable, bolt and possibly a rung, in addition to substantial terrain movement of large rocks and trees. Those most familiar to the area may notice large loose sections of natural terrain that are likely gone or dramatically altered.