Telluride Mountain Club (TMC) has joined forces with Between the Covers Bookstore (BTC) and Jagged Edge Mountain Gear to collaborate on a new project: The Mountain Lit Author Series. We are thrilled to partner with the two local and independent retailers on the Mountain Lit series, it’s always an inspiration to hear stories of travel, climbing and lessons learned in the mountains. We are excited to be part of an innovative approach to storytelling in a community that embraces adventure. The event itself promotes a casual gathering—in camp chairs provided by Jagged Edge—as if around a campfire, swapping tales amongst old and new friends. Authors will read from their books (some will provide a slideshow), followed by a Q&A, and then a booksigning. Daiva Chesonis, co-owner of BTC, points out that the format and feel will be similar to the Ski Lit Author Series from 2013 which hosted Porter Fox, David Rothman, and an evening of local female writers. Because TMC is a non-profit that both BTC and Jagged Edge believe in, new TMC hats and t-shirts will be available via Jagged Edge and a donation jar will be on hand for that spare change jingling around in your pockets. The series is BYOB.

The first event of the summer will take place on Tuesday, June 23, at 7pm at Jagged Edge. Featured authors will be Brad and Melissa McQueen with their book Exposed: Tragedy and Triumph in Mountain Climbing ($18.95 Paperback / Black and white photos). Published by Big Earth Publishing in March 2015, Exposed has been called “a gripping, compelling, and unforgettable story, read this poignant book to learn the mountains’ hard lessons. Inspiring!” by climber and author Ed Webster (Snow in the Kingdom, My Storm Years on Everest).

THE BOOK
You’re an experienced mountain climber who has successfully scaled several Colorado 14ers. You’re out for a late spring hike with family when you reach the summit of one of your favorite peaks and see the growing dark grey clouds of an impending storm looming above. You quickly head down the mountain back to the safety of your car, but your tired legs can’t carry you fast enough. A late spring snowstorm begins, and soon you’ve lost the trail …

It was this harrowing event in May 2001 that Brad and Melissa McQueen, his father, and their dog survived, but not unscathed. Melissa suffered severe frostbite and lost eight of her toes. This is the story of this life-changing event as well as accounts of numerous other worldwide mountain climbing adventures. Told with humor, compassion and deep honesty, and written with the skill of a seasoned writer, Exposed is not just a recounting of their mountain climbing excursions; it is a guide for other ambitious mountain climbers on how to survive while traversing our many peaks, and it is a story of the beautiful tenacity and determination of the human spirit.

Other adventures in the book include successful quests to complete all 54 Colorado 14ers and climbs of Mt. Rainier, Mt. Kilimanjaro, the Grand Teton, Denali, and Ecuador’s Antisana and Cotopaxi. In addition, Brad recounts the tragic loss of a dear friend during one excursion and his struggle to come to terms with it.

THE AUTHORS
Brad McQueen is an avid hiker and climber and a partner in the Denver-based CPA firm, EKS&H, as well as an adjunct professor at the University of Denver where he teaches auditing. He has climbed all of Colorado’s 14,000-foot peaks along with other mountains in the United States and abroad. A member of the American Alpine Club, he currently serves on the Boards of Directors of Volunteers for Outdoor Colorado and Colorado Fourteeners Initiative.

Melissa McQueen is a passionate educator and outdoors person. She has climbed 11 of Colorado’s 14,000-foot peaks and 19,330-foot Mt. Kilimanjaro, in addition to attempts on Mt. Rainier and the Grand Teton. Her frostbite story was first told on Colorado Public Radio’s “Here’s What Happened” program and she was featured in Backpacker Magazine’s 2012 Survivor Edition. She unofficially holds a large number of “firsts” and “speed records” for two-toed people. She is a member of the American Alpine Club and volunteers each summer with Big City Mountaineers, taking groups of inner city high school girls on their first backpacking trips.

Brad and Melissa live in Denver, Colorado, with their two children.

Half of all profits from book sales go to non-profit organizations that do work in the outdoors, Alpine Rescue Team or ART, Colorado Fourteeners Initiative (CFI), Volunteers for Outdoor Colorado (VOC) and Big City Mountaineers (BCM) plus UpaDowna in Colorado Springs. 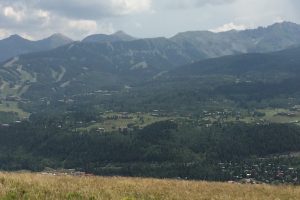 This fall, the Telluride Mountain Club (TMC) put together a[...] 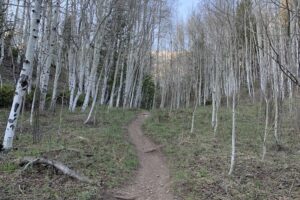 Get Out! June hike of the month, Eider Creek to Deep Creek

Eider Creek to Deep Creek Many Tellurites will tell you,[...]