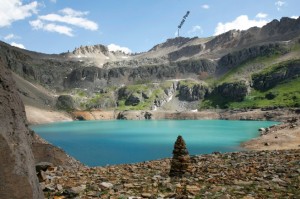 The Telluride Mountain Club announced this week their support of a proposal to rename the unnamed peak located on the ridge between Lewis and Blue Lakes back to its original name of Bridal Peak.

The name was left off from an older The United States Geological Survey (USGS) map, which left the summit unnamed.

In a letter to the USGS, the Mountain Club commended Delta resident Jeff Burch for alerting the Club and community to this detail.

Returning the name to this peak  popular idea amongst the Telluride Mountain Club members and its board.

“We have never heard of any other name being prescribed to this peak and therefore know of no conflict that this naming will cause,” said Josh Borof, who sits on the Telluride Mountain Club Board of Directors.

The USGS has made note of the Mountain Club’s support and has shared the Club’s recommendation with the Colorado Board on Geographic Names and the U.S. Forest Service; both organizations have been asked to provide comments before the U.S. Board votes on the proposal. Once the U.S. Board renders its decision, the USGS will relay the outcome to the Telluride Mountain Club.